From the Blue Mountains to the Iron Hills...

Found these on ArtStation.

Like almost everything except the hiking boots and the compound bows.

The thumb draw is interesting, its better for a shorter bow as you're less likely to suffer from 'stacking' (where the angle of the string squashes the fingers together causing the arrow to 'squeeze off' or in lay terms, the arrow comes off the rest ).
I also like the fact that both archers are drawing to the ear rather then the modern short 'kissing' draw.

A bow like the Mongol types with rigid 'syiahs' on the ends of the limbs does give a similar (but not as pronounced) let down to Compounds.... That first one looks almost like the artist drew a Mongolian then added wheels and a complex string for some reason.

I seem to remember that metal bows for Dwarves is canon

I don't find either pair of boots too offensive, the second ones look like winter hobs.
What does bug me is both guys are shooting off the thumb rather then the knuckle, but one has the cock feather out (as it should be) but the other seems to have it towards the bowstave!

ETA A second look makes me think the first guy is using arrows fleched with two vanes like a crossbow bolt.... Odd in that I don't think that crossbows are mentioned anywhere in the source.

The second archer carries his arrows the same way I do....... So of course hes brilliant

I have seen work by that artist before, a lot of it is very cool
Gimli: It's true you don't see many Dwarf-women. And in fact, they are so alike in voice and appearance, that they are often mistaken for Dwarf-men.
Aragorn: It's the beards.
Top

Close; they were Numenorean.

Those are really cool drawings, and I agree, there's a lot there that's functional. The chain maille over a clearly padded garment is a great level of detail.

As for the compound bows...I'm hoping it was just someone googling "Bows" and drawing what they saw, 'cause no amount of Dwarves ingenuity should've arrived at Compound bows until about the 7th age.
Now the sword shall come from under the cloak.
Top

Greg wrote: ↑Fri Jul 15, 2022 1:55 am As for the compound bows...I'm hoping it was just someone googling "Bows" and drawing what they saw, 'cause no amount of Dwarves ingenuity should've arrived at Compound bows until about the 7th age.

I actually know this artist on a different platform and they are very much a concept art/designer when it comes to fantasy, particularly with weapons, these art works were made as a "what if" idea, just because the concept of dwarves with compound bows seemed fun to make, very much like me and Tom Ranger debating Hobbits driving steam trains over on that other thread. These are also not specifically middle earth, the tags the artist uses are just for the algorithm
Gimli: It's true you don't see many Dwarf-women. And in fact, they are so alike in voice and appearance, that they are often mistaken for Dwarf-men.
Aragorn: It's the beards.
Top

Boar crest helmets - no! Seems too Anglo-Saxon (aka Rohirrim) to be properly Dwarven. I'd look to Eastern Europe for some helmet inspiration.

The boots? - Not especially egregious. Reminds me of Roman calcei which is fine. Suits a more industrious people.

Love the mail in the first picture but what the heck are those studs for on their chest? Looks like the standard D&D studded leather armor but in mail haha.

Seems just a tad over-decorated (clothing, sheathes, belts, etc.) to my eye. I know Dwarves are fond of shiny things but sometimes less is more.

The idea of Dwarven tattoos is interesting. No mention of tattoos in the lore I think but somehow it suits them.

ForgeCorvus wrote: ↑Fri Jul 08, 2022 8:38 pm I also like the fact that both archers are drawing to the ear rather then the modern short 'kissing' draw.


Interesting. I haven't heard of one being more historical than the other. I use the shorter draw because my draw length is already long (30.5) and adding more can be a pain.
Persona : Cimrandir - late 3rd Age Dunedain
Top

The long draw, to anchor near (or behind) the ear is normal for Heavy English longbow (also known as 'Warbow') due to the need to 'get your body into the bow'

Well, right. I knew that the warbows of the later centuries were drawn to the ear to maximize power but I suppose more what I was asking was if the draw to the lip/cheek is entirely modern and thus unseen in the historical record at all or if say, it was used in a historical hunting context where you would value accuracy over power.

I just don't know that much about historical methods and techniques. Bow and arrow finds, sure but the methods don't usually leave evidence in the archaeological records hahaha.
Persona : Cimrandir - late 3rd Age Dunedain
Top

I don't know if people do know, in the historic drawings etc... anchor points and technique vary quite a lot between archers, so that might be because of error in the way the artist made the drawing, or my preferred explanation: the archer in question did what ever worked best for him/her
Gimli: It's true you don't see many Dwarf-women. And in fact, they are so alike in voice and appearance, that they are often mistaken for Dwarf-men.
Aragorn: It's the beards.
Top

True, a lot of Stickhead target archers draw short, but most seem to anchor on the cheek rather then the lips. I suppose its because we don't have sights we need to anchor under the eye.
Heavy bow has to be drawn like I've shown that because of biomechanics, with lighter hunting bows results matter more then style

I suppose if we take one of the commonest sources as gospel, we should all use a two-fingered 'English' draw and anchor on the right nipple. 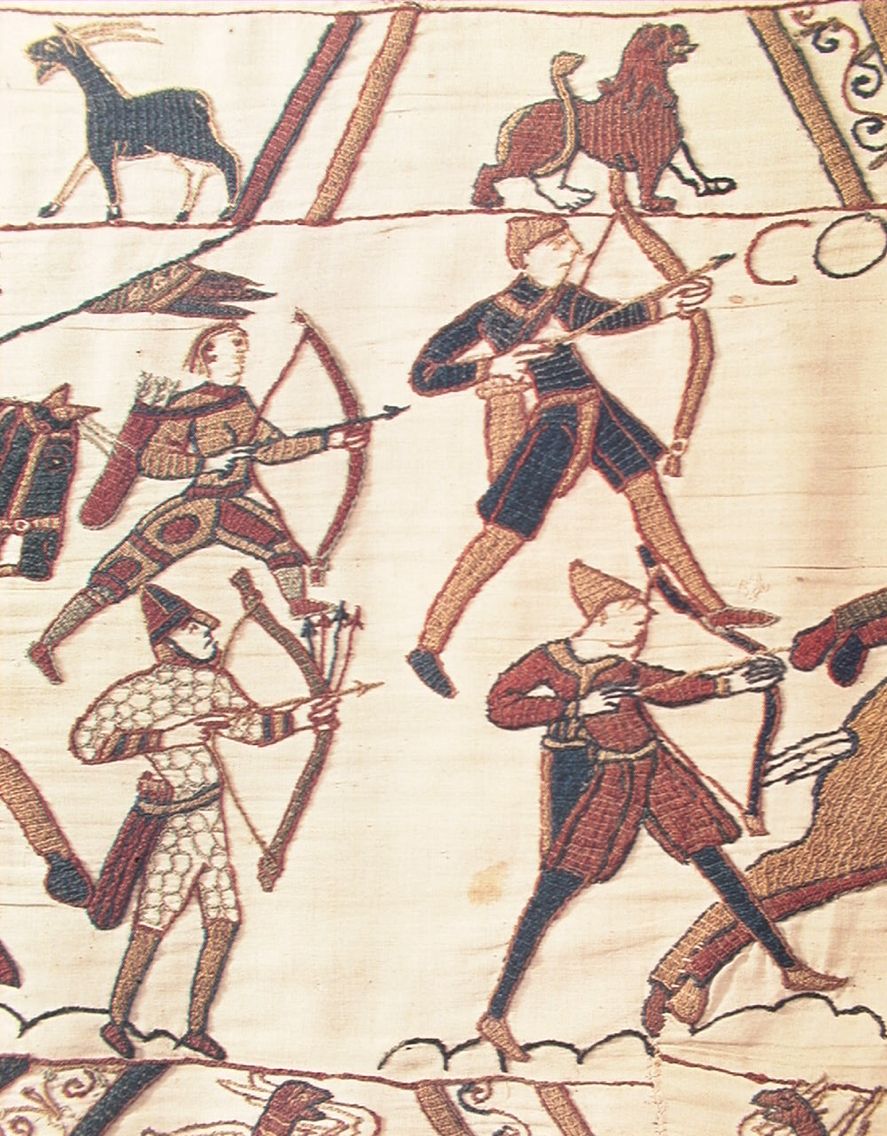 This is actually an example of a realistic depiction of technique in art. I have a replica 12th century Norman bow and it's quite small. There is no way you can draw it traditionally without snapping it and so you end up drawing it to either your nose OR exactly as you see on the tapestry.
But the white fury of the Northmen burned the hotter, and more skilled was their knighthood with long spears and bitter. Fewer were they but they clove through the Southrons like a fire-bolt in a forest.
Top
Post Reply
12 posts • Page 1 of 1